Enough With “I Date Women And Trans Men”


“I date women and trans men” is the definition of cissexism. It’s basing your frame for sexuality on the gender coercively assigned to a person by their doctor at birth, not on that person’s actual identity. In this case, we’re talking about folks who were assigned female. Of course, “women” means cis women – trans women totally drop off the map.

My critique of this frame isn’t about everyone on the trans masculine spectrum, where there’s a ton of complex gender and sexuality diversity (though there is an important conversation to have about the privileging of masculinity here as well). I’m talking about how this approach to sexuality addresses people who were assigned female at birth but are men.

It’s incredibly undermining to frame sexuality in a way that lumps these men in with all female assigned folks instead of with cis men. It’s a failure, in the realm of sexuality, to recognize that trans men’s male identities are just as legitimate as cis men’s. If you’re going to base sexuality on gender, better base it on people’s actual genders.


I get why a lot of female assigned folks exist in this frame for reasons that aren’t overtly about undermining trans identities. There’s a ton of gender based trauma out there, and I understand that folks associate this with cis men, and not with trans men. But that’s not a reality-based approach to gender. A lot of that trauma gets easily linked to genitals, but this isn’t about bodies, it’s about patriarchy. I think this sexuality frame is a big part of why so many trans men get away with (and are sometimes even encouraged to practice) unchecked misogyny and male privilege (remember, power is complicated. You can experience both male privilege and cissexist oppression). Real talk: being trans doesn’t prevent you from perpetrating hurt and violence in the realm of sexuality. 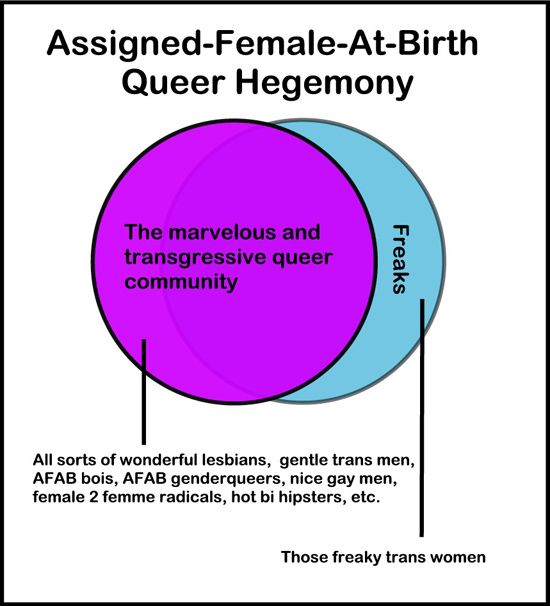 My trans brothers deserve better than sex in a frame that undermines their identities. This doesn’t mean queer cis women and gender non-conforming female assigned folks can’t fuck trans men, but then they owe it to these guys to reframe their sexuality in a way that’s not undermining – to recognize that they sleep with men, and to question why they’re OK with sleeping with trans men and not cis men. I just don’t think it’s OK to process your sexual trauma in a delegitimizing way through the bodies of folks who’ve often faced tons of trauma at the intersection of gender and sexuality.

The problem isn’t one sided: trans guys owe it to themselves to not accept a misgendering sexuality frame just because it makes it easier to get laid, but that shit’s complicated in a cissexist world. It’s unfair to place all the responsibility for fixing this problem at the feet of the people who’s identities are being undermined. I want to encourage trans guys to stand up for what they deserve, but a lot of the responsibility for fixing this shit belongs to the people doing the undermining.

I do put a little more responsibility on trans men for letting this frame push their trans sisters out. This approach to sexuality totally erases trans women by excluding us from the group of sexually existing queer women. Yes, it’s also incredibly undermining of trans women’s identities by moving us out of the category “women” when it comes to sexuality. Ultimately, this frame goes back to the gender coercively assigned at birth for trans women as well. It’s a way for transmisogyny to advance unchecked, because trans women totally drop out of the conversation. It’s part of the broader problem of privileging masculinity over femininity, and specifically  of privileging masculinity in female assigned folks and hating on and marginalizing femininity in male assigned folks. The problem goes beyond gender theory about masculinity and femininity – this is about really specific, really real transmisogyny. Even when some femininity is accepted, it’s in female assigned folks. Trans women (even the butch ones) get left out in the cold. (I think it’s time for everybody to re-read Julia Serano’s groundbreaking book Whipping Girl with their sex brains on.)

There’s a lot of resistance to thinking about the politics of sexuality in this way, which I totally get. Our sexualities are our own, they’re personal, and in such a puritanical world any critique of sexuality can seem messed up. But our desires are absolutely influenced by our cultural context. When you really look at the way patterns of desire map onto what bodies are privileged and what bodies are marginalized, it becomes obvious that our desires are political. I am absolutely not about critiquing the way one person falls for another. The problem is with a community trend. When we leave sexuality trends unexamined, sex becomes a space where privilege and oppression run amuck.

It’s well past time to say enough. If queer community wants to be about a gender and sexuality revolution it’s got to take these questions seriously. Its got to address the ways cissexism overdetermines community approaches to sexuality. This is an ongoing process involving lots of thought, critique, and, well, processing. We’ve got to be able to move from the broad and systemic to seeing how cissexism plays out in our personal lives, including in relation to who and how we fuck.